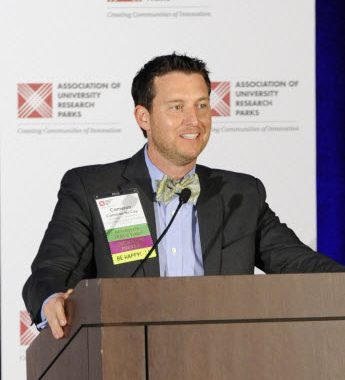 The University of Oklahoma Research Campus (OURC) has won the 2013 Outstanding Research/Science Park Award. The Association of University Research Parks (AURP) has awarded excellence, recognising the parks that excel in bringing technology from lab to industry. Being at the interface of university-industry interaction, University Research Parks make a direct contribution to science, business, innovation and society in general. As Cameron McCoy (Executive Director Corporate Engagement Office, University of Oklahoma) stated “We are entrepreneurs working toward the economic development of the entire region“. Where just a decade ago there was nothing but empty fields, the OU Research Campus now comprises 100.000 square meters of occupied space, representing a $300 million investment. With 15 private companies on campus, as well as a wide variety of research centres, the Research Campus brings together more than 1.700 individuals from academia, government and industry. Therefore, fulfilling its role in the ‘triple-helix’ environment.

Being located in the middle of Tornado Alley, OURC contains several weather focussed research facilities, amongst which the National Weather Center, two “Partners Place” facilities and the Radar Innovations Laboratory (opens in 2014). In the middle of all these research facilities, the Corporate Engagement Office facilitates the interaction between research and industry, acting as a ‘one-stop-shop’ for industry and making a direct contribution to the economic development of University Oklahoma and its region.

Interested in learning more about the Oklahoma Research Campus? Have a look at their website, or watch their video here. Looking to collaborate? Contact their Corporate Engagement Office!