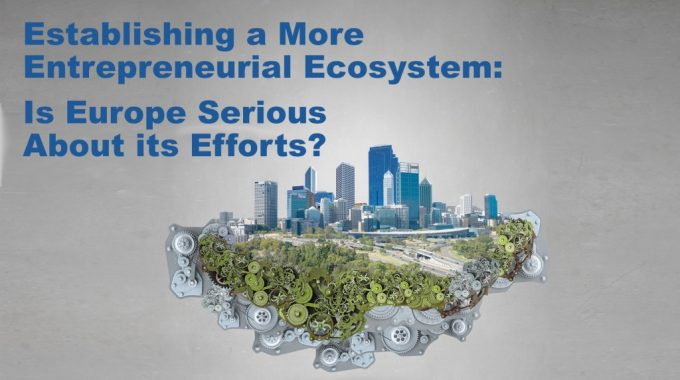 With the European Commission’s current investments in the Knowledge Alliances, we are witnessing a ‘trial’ of sorts for a method of funded university-business interaction designed to create more entrepreneurial universities and to improve business competitiveness and student employability; a method that will take some years for the full outcomes and impact to become truly evident, but also limited in its funding. If Europe is truly serious in its efforts to fund education-industry collaborations, the European Commission must manifest this in greater and more strategic financial investments.

The past several decades have proven that collaboration between university and industry is essential for education, research, and innovation in Europe. For the last 30 years, the focus has been on transferring technology from Higher Education Institutions (HEIs) to businesses through patenting and licensing with mixed success. However, this focus has recently shifted toward transforming HEIs into more entrepreneurial and engaged organisations with the European Commission creating a raft of initiatives to develop European entrepreneurship. This refocus aims to significantly increase the impact of universities on sustainable and innovative growth, youth unemployment, and the general improvement of the higher education system.

So what efforts are actually being made by Europe to establish this “entrepreneurial ecosystem”? The need for an entrepreneurial ecosystem has been acknowledged by the European Commission, as evidenced by initiatives from the Directorate General for Education and Culture (DG EAC) such as University-Business Forums, Knowledge Alliances, and Strategic Partnerships.

The Knowledge Alliances initiative is designed to support universities and businesses to bridge the gap between education and industry by establishing structured partnerships as well as by developing new ways of producing and sharing information.

Following a trial period through small public tenders, these Knowledge Alliances have been integrated into the European Commission’s Erasmus+ programme; a 14.7 billion euro grant programme for furthering education, training, youth, and sport through transnational partnerships. The funding programme focuses on promoting entrepreneurship and innovation across the European continent through long-term cooperation between university and industry, which allows universities to develop themselves into suitably engaged institutions for the entrepreneurial ecosystem.

Funding for the Knowledge Alliances

Is Europe making sufficient investments toward establishing entrepreneurial ecosystems through the Knowledge Alliances programme? The evaluation of the 2014 Erasmus+ programme shows high interest in the initiative, with ten proposals receiving funding out of the 230 proposals submitted that round. However, that funding amounts to between ten and fifteen million euros annually; just 0.1 percent of the funds granted to Europe’s Horizon 2020 grant program in the same time-frame and 0.7 percent of the Erasmus+ programme funds. This means that there is 1,000 times the amount of funds being invested in European research (through the Europe’s Horizon 2020 grant programme) than in the Knowledge Alliances.

As a result, the capacities of the Knowledge Alliance programme are limited and resulted in less than five percent of the submitted proposals having received funding over the past two years. The odds still beat playing the lottery, but I can imagine that it sure feels like a gamble for those who invested months into writing one of the four hundred rejected proposals.

If we view this development through rose-coloured glasses then, the European Commission could be on the right track; making small investments trailing and adjusting methods to regionally embed the entrepreneurial mind-set. However, seen through a more critical lens, the current investment in developing these Knowledge Alliances, and the number of projects funded, is far from sufficient if we are to truly create the right sort of ecosystem and have enough alliances to make the shift required.

The amount of funding made available by the European Commission may be critical to the programme’s success, but the development of the European entrepreneurial ecosystem also depends on how that funding is being used—we’ve seen many countries fail in their attempts to copy the Silicon Valley model. An example of this is the U.K.’s East London Tech City, which has often been viewed as merely an expensive marketing tool for London and the British government. Tech City has invested heavily in ‘creating the right environment’. However, through funding co-working spaces, new infrastructures and providing seed-funding, Britain has overcome its major concern: the lack of talented entrepreneurs.

To attract more talented entrepreneurs, the UK government has provided 200 Tier 1 “Exceptional Talent” visas to Tech City who, however, has only received 37 applications of which 28 were rewarded. Rather than investing a large sum of money to emulate a model that worked in a different economic environment or trying to attract external talent, the focus should be on equipping today’s students with the appropriate skills. Not necessarily through teaching children to code in primary school, but through establishing an entrepreneurial way of thinking and acting.

It’s possible that the European Commission is on the right track, making small investments to start from scratch and regionally embed the entrepreneurial mind-set. However, establishing and developing Knowledge Alliances and other organizational initiatives should become a greater priority if we are to elevate the ecosystem. If Europe is truly serious in its efforts to fund an education-industry collaborative, they must not only express their concerns, but manifest this through strategic financial investments.