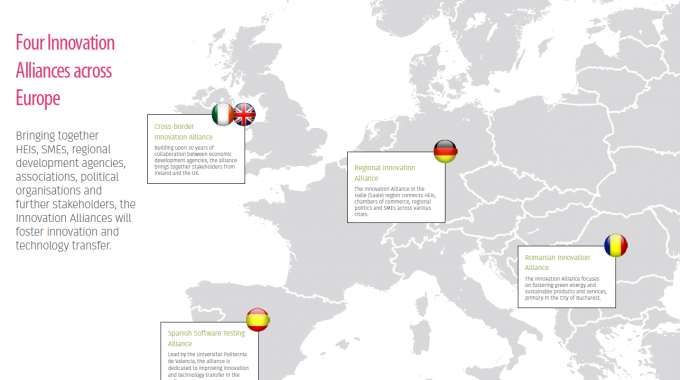 Since the last update in December, the four innovation alliances (based in Germany, Ireland, Romania, Spain and the United Kingdom) have been exceptionally busy pushing forward activities intended to drive innovation through establishing partnerships between SMEs and HEIs. Here, they update us on their development and project progress…

The Cross Border Alliance between Ireland and the UK continues to develop with the addition of a further partner from the Republic of Ireland. County Meath is an area with a strong manufacturing base and the population has access to six 3rd level institutions within a close commuting distance with well-established links between HEI’s and the business community.The key action pursued as a result of the Cross Border TIAs deliberations has been to make a case to the Governments of the Irish Republic and Northern Ireland that there should be a mainstream innovation development programme for SMEs with innovation potential throughout the Northern Ireland/Republic of Ireland INTERREG region (and not just focused on Belfast and Dublin) and that it should harness the expertise and resources of the HEIs in the region, local development stakeholders and central government agencies working together in a collaborative delivery framework. As a result of this initiative NMEA has represented a cross border partnership of local enterprise agencies in an alliance of support agencies and HEIs championed by the intergovernmental body, Intertrade Ireland (a member of the Cross Border TIA). That partnership has developed a large scale SME innovation support programme proposal for Northern Ireland and the Republic of Ireland. Its ultimate objective is to initiate innovation in 1,100 SMEs and to generate 20 substantial Horizon 2020 projects by 2021. It is proposed that this initiative will be extended to include the west of Scotland. NMEA, Louth LEO and Meath LEO would all play a significant role in the delivery of this seminal intervention. The proposal is currently being appraised by the Special EU Programmes Body (SEUPB). Its decision is expected in June 2016.

On Thursday the 11th of February, Alliance stakeholders were able to have a first look at the results of so-called “Science Scorecard”. This is a benchmark study on innovation and scientific activities in the Halle/Saale regions which accompanies the activities of the Innovation Alliance. The study is prepared by “Stifterverband für die Deutsche Wissenschaft” – a nationwide expert association of scientists and high-rank business representatives – on behalf of the Innovation Alliance stakeholders. Its results serve the Innovation Alliance twofold. First, it provides an independent evaluation on innovation and scientific (transfer) activities in the region by an external group of experts. Secondly, the study reveals existing deficits in the fields of innovation and knowledge transfer in the Halle/Saale region which will be used to strategically define future priorities of the innovation alliance. “We are anxiously waiting for the final results of the study. The value added for the work of our alliance is expected to be high”, says Daniel Worch, CEO of Univations GmbH and head of the innovation alliance in the Halle/Saale Region. The main outcomes of the study will be presented in short. They will also provide the basis for a fruitful discourse involving all other alliances inside the innovation alliance project.

In May 2015 a major scientific event was organised by UPB with the aim of bringing together HEIs and SMEs representatives (Productica 2015). A special section within the event was organized by the Romanian Alliance: “Alliance between University and Industry”. Following the success of the event, this year UPB will organize Productica 2016, also focused on providing a communication platform for universities, research institutes and companies, not only to present their latest research results, but also to share and discuss the perspectives of the next developments in the subject fields. Over 100 participants are expected.

Awards
UPB through Prof. Miron Zapciu, SHIP project staff member, won the gold medal at 43rd International Exhibition of Inventions Geneva 2015 with the request of patent A01013. Through the Romanian Alliance, the technological transfer of the patent idea to a local SME will be realised, in order to implement it in a market product.

The celebration of the 4th Meeting of the Spanish Software testing Innovation alliance took place on the 15th of December 2015 in the city of Donostia-San Sebastián (Basque Country, Spain). The event attracted presentations from both industry and universities that had specific interest in the area of software testing. The audience was also composed from professionals and academics in the field of software engineering. The presentations covered a wide range of topics, including the ISO/IEC/IEEE standard for software testing, automated tools (TESTAR), agile development for software testing, database testing, industry experiences with software verification, quantifiable benefits obtained from testing improvement, software testing processes, user interaction, etc. The workshop format (with short presentations) allowed a fruitful interaction between speakers and attendees.

To find out more about the Innovation Alliance, please visit innovationalliance.eu