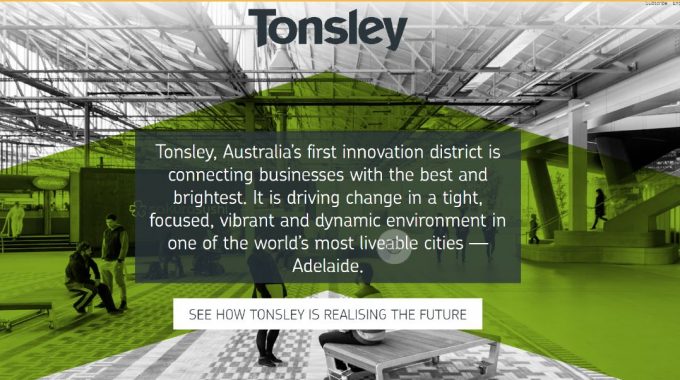 The vision for Tonsley’s Innovation Precinct is to be a place that creates high value jobs by collocating world class research and education institutions and a related variety of innovative businesses alongside vibrant, modern residential living and retail space.

The origins of Tonsley Innovation Precinct

When Mitsubishi ceased production in Adelaide in 2008, there was a clear imperative for the South Australian Government to do something innovative and internationally significant at a site described as a ‘once in a lifetime’ land development opportunity.

There was also a realisation that any redevelopment could not be a traditional science or office park. In an era where connectedness is paramount to drive innovation and entrepreneurship, the siloed science park seems outdated. A visionary approach was required to address the major impact Mitsubishi’s closure would have on Southern Adelaide’s economy. There was a need for the response to Mitsubishi’s closure to be transformative; to help industry, particularly manufacturing, change and move to higher value products. Manufacturing is considered an essential element in a resilient and prosperous South Australian economy. This need of renewal and growth was the origin of Tonsley Innovation Precinct.

Tonsley’s design and early development What was initially described as developing Tonsley’s soft as well as hard infrastructure, incorporates bringing research and industry together; encouraging business-to-business collaboration; clustering activity from businesses with a shared industry focus in fields where South Australia has a comparative advantage; and creating an environment that supports entrepreneurial activity and a culture of innovation. This is why Tonsley has been designed as a mixeduse precinct that incorporates high density residential, retail, education, commercial and industrial land uses.

The model for achieving this vision has been based around a triple helix partnership between government, university and industry. This model incorporates the development of high amenity, mixed use urban development (physical assets), populated with anchor businesses as well as research and training institutions (economic assets) in an environment that supports entrepreneurial activity and a culture of innovation (networking assets) to create an innovation district.

Since the implementation in March 2012 of a 20-year redevelopment project, it is evident that the triple helix partnership is established and the vision for Tonsley is being delivered both from an urban renewal and economic development point of view.

With Flinders University, a tertiary education and research institution, and TAFE SA, a vocational skills training institution, both established on site, there are numerous opportunities of collaboration with industry, some of which are already evident through companies such as Zen Energy.

Leading and innovative business have invested and are operating on site, including companies such as Siemens, Somark, Signostics, Micro-X, and more. In addition to that, Tonsley’s co-working spaces and associated business incubation and acceleration programmes all contribute to creating an entrepreneurial environment and culture of innovation.

Tonsley’s design excellence has been acknowledged with a series of development industry awards, including international acclaim, winning the 2015 World Architecture News Award for Adaptive Reuse. Furthermore, Tonsley has been awarded a Six-Star Green Star – Communities accreditation by the Green Building Council of Australia and represents the highest level of leadership and innovation in high quality, sustainable urban renewal.

Over the coming years, Tonsley intends to become firmly established as an economic growth engine for South Australia as the precinct reaches a critical mass of industry, research, education and commercial activity collocated on the site. The residential population on site will expand towards the ultimate target of 1,200 people to create a vibrant community that supports innovation and entrepreneurship. Also, a smart grid energy system will be established that incorporates onsite renewable energy generation, storage, distribution management and supply to site occupants. Ultimately, the Government of South Australia intends to divest ownership of all property assets at Tonsley. At the completion of the project delivery phase, the intention is to leave behind a self-sustaining precinct governance model that will have ongoing responsibility for maintaining Tonsley’s culture of innovation, collaboration and entrepreneurial activity.

The challenge of dealing with uncertainty

It has always been acknowledged that the vision for Tonsley would face fundamental challenges as the traditional manufacturing sector experiences unprecedented uncertainty and decline across Australia. South Australia’s economic challenges that led to the initiation of the Tonsley project in the first instance have significantly compounded in the short time since the project was approved just under 5 years ago.Therefore, South Australia is yet to see the full impact of the local General Motors Holden closure and the national withdrawal of the automotive manufacturing industry on the South Australian economy. Similarly, the wave of investment from the expected resources boom did not materialise in South Australia. Thus, while the need for proactive, visionary initiatives like Tonsley has never been greater, the economic environment that the Tonsley Innovation Precinct is operating in has rarely been more challenging.

Philipp Dautel is responsible for the delivery of the Tonsley Innovation Precinct vision, including facilitating collaboration between research institutions and industry to promote innovation and commercialisation opportunities. He also leads business development and investment attraction in the precinct through engaging with industry and communities (locally, nationally and internationally) and enhancing commercial opportunities. Before joining the Tonsley team, Philipp was facilitating a Federal Government Programme in South Australia where he helped companies engage with research organisations to drive innovation and business growth for SMEs. He also worked at UniSA’s technology commercialisation company, UniSA Ventures, which included assessing and developing commercial opportunities.

Jed Gunn is managing the development and implementation of major elements of the Tonsley Redevelopment Project’s economic development and investment attraction strategy, including Tonsley’s Economic Development Plan, Investment Attraction and Business Development Model and Benchmarking Framework. Prior to his work on the Tonsley project, Jed had extensive experience in the delivery of major urban renewal projects for the South Australia Housing Trust and with Adelaide City Council’s residential growth program. Jed is a qualified Quantity Surveyor who has worked in construction and project delivery roles in the private and public sector over the last 20 years.