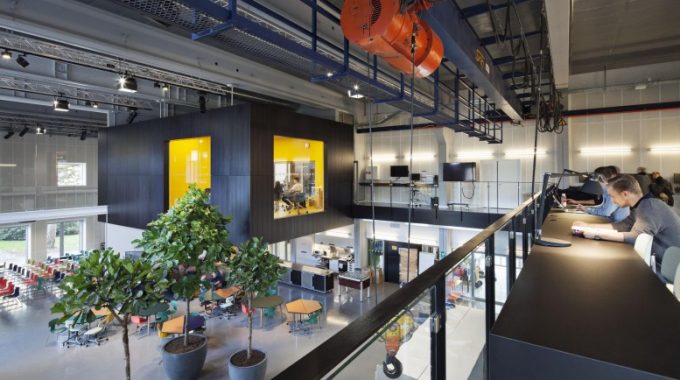 Located within the Technical University of Denmark (DTU), Skylab is an innovation hub that is designed to create a community of entrepreneurs in the wider Copenhagen region through the principles of open and collaborative innovation. DTU Skylab was initially implemented in March, 2013. The idea was to check how the students and the academic community would react to an open and creative environment with facilities for quick prototyping and testing.

After a year of the pilot phase it became clear that it is attracting considerable interest from students, the academic community and university leadership. Consequently, Skylab 2.0 was initiated in September 2014 by building on the lessons from the trial phase. Skylab 2.0 is positioned in a renovated building that contains spacious rooms for project meetings, an open working area, a dedicated lounge and well-furnished workshops with state of the art equipment. The aim is to create a dynamic space for cross-disciplinary collaboration that is open to everyone.

To begin with the first area of emphasis, a wide range of pre-start-up and start-up support is provided for students who aspire to initiate their own venture.  The support often depends on the level of idea development; for students who are at the early stage of their start-up concept, the coaches and mentors at the lab provide pre-start-up guidance to help them further refine and develop the ideas, and for those with more concrete ideas the team provides guidance on issues like financing, patenting and marketing. The workshops, e.g. on metal, wood and electronics, are also critical component of the lab as they allow instant prototyping and testing of ideas. Moreover, the students could participate in any of the open events organized at the lab.

Secondly, the team tries to provide students a sense of the real-world environment by presenting them a series of company challenges they are expected to solve. These events often involve sponsorship by the participating companies, as such the winners will get a financial prize. The Open Innovation X (Oi-X) is such a program launched in 2016. Winners could get as much as 70.000 DKK. So far the event has attracted big names such as IBM, KPMG and Siemens. Additionally, the university supports some of the promising projects though scholarships.

Lastly, the lab also works with the academic departments to help them make their programs more entrepreneurial. To provide some practical examples, the Skylab team for instance has co-designed new courses on ‘High-Tech Entrepreneurship’ and ‘Business Model Design for Growth Entrepreneurship’ under the Bachelor and Masters levels respectively. Additionally, the academic staff at DTU are allowed to integrate the data from the lab into their teachings.

The statistics produced as part of the monitoring and evaluation tells a very positive story. Since its inception Skylab has supported over 500 pre-start-ups/projects, leading to 190 spinouts. What is more, the lab has attracted a staggering 70,000 visitors since its opening in 2014, 500 of whom are students who took entrepreneurship and innovation courses.

A number of factors have contributed for the early success of DTU Skylab: a university leadership who is determined to create an entrepreneurial posture; a tailor made facility designed based on the requirements of students and academics; a collaborative approach that is open to everyone including those that study in other universities; and an approach to innovation that empowers students.

Do you want to learn more about the activities at DTU Skylab? Please have a look at the original case study here.

This blog is based on a case study originally written by Mihai Melonari (Science-to-Business Marketing Research Centre).