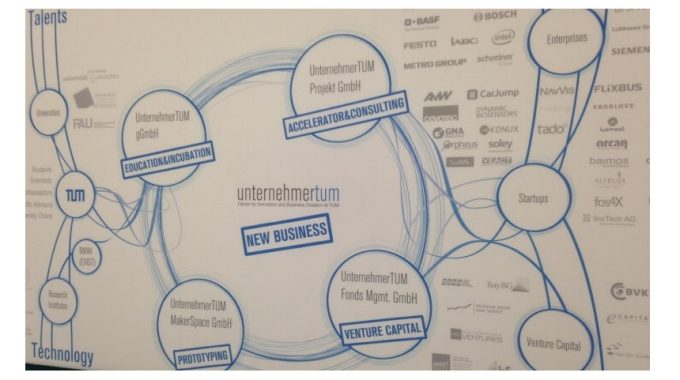 Supporting the development of high-growth tech start-ups from idea to fast growth is the ambition of UnternehmerTUM (UTUM). As a spin-off of the Technical University of Munich (TUM), UTUM has access to students and academics from one of the best technical universities in Europe. Being located in the German state of Bavaria, the economic engine of Germany and the home of BMW and Siemens, it is part of one of the best tech startup ecosystems in Europe.

Since its foundation in 2002, UTUM has developed into a one-stop-shop for entrepreneurs to get training, incubate, prototype, access funding, and receive consultation for their tech-based ventures. Today, the centre has 170 employees and comprises the UnternehmerTUM GmbH established in 2002, as well as its subsidiaries including UnternehmerTUM Projekt GmbH that focuses on projects with industry and government, Unternehmertum Venture Capital Partners GmbH, a venture capital subsidiary, and UnternehmerTUM MakerSpace GmbH that provides facility and equipment for practical development of products and services.

Since its launch, the centre has grown to prove itself as an engine of innovation in the Bavaria region, producing more than 50 high-growth technology start-ups annually, each year hosting 2000 participants in UnternehmerTUM programmes, and facilitating start-ups hit the market, with some of the high-profile ones including e.g. FlixBus digital platform for long-distance buses, Konux, an artificial intelligence company enabling predictive maintenance, Navvis, an indoor-navigation solution, and Tado, a smart home company providing smart thermostats. What’s more, over the years UTUM has developed a strong alumni presence of over 500 members that gathered under the roof of Manage & More Alumni Association, offering graduates network and numerous career opportunities.

What lies behind this success story?

The policy direction of the Bavarian state government, including initiatives designed to push Bavaria as ‘Germany’s Silicon Valley’, characterise the proactive approach taken by the State Government. The support in terms of policy focus and finance allow centres of innovation, such as UTUM and technology-focused business and new ventures, to develop into world leaders. Recently Munich Airport announced the ‘City of the Future’ LabCampus tech hub to be built in their premises, as a high tech campus for high-tech industries in sectors e.g. aviation, space technologies, digitalisation, and energy, backed up by Bavarian State and Regional Development Agencies. According to Local.de, the campus is scheduled to be completed in two and a half years’ time, and after becoming operational, it will provide 5,000 jobs. Potential partners of the project include Siemens, Fraunhofer Institute, Friedrich Alexander Universität Erlangen-Nürnberg, and UnternehmerTUM.

UBC support system at all levels

In the case of UTUM, it is not only the policy directives, but also strategic support of the senior management, complemented by the institutional acceptance of the need for external engagement through collaborations with business and entrepreneurial activity, that has contributed to the success of the centre as one of the major players in the new venture creation. This underpins the willingness of the university to provide funding as well as connection and promotion of UTUM programmes to its courses, students and faculty.

UTUM has also made investments in physical infrastructure. In addition to their complex on the campus of TUM, they have developed a MakerSpace: one of Europe‘s largest publicly accessible high-tech workshop enables companies, start-ups and creatives to produce prototypes and small batches using state-of-the-art machines such as large 3D printers. Covering 1500 square metres, MakerSpace acts a hub to bring together businesses together with students and researchers whilst offering business the opportunity to get their innovation departments and employees out of the office with access offered through one-off access fees as well as subscriptions.

The need for TUM and other universities in Bavaria to interact more profoundly with industry has been a leading factor in the state’s development. Developing leading research and development skills as well as having appropriately skilled workers to fuel this growth have been a result.

To learn more about UnternehmerTUM and its activities, read the full case study here.

©all rights on images used in this article belong to UnternehmerTUM.