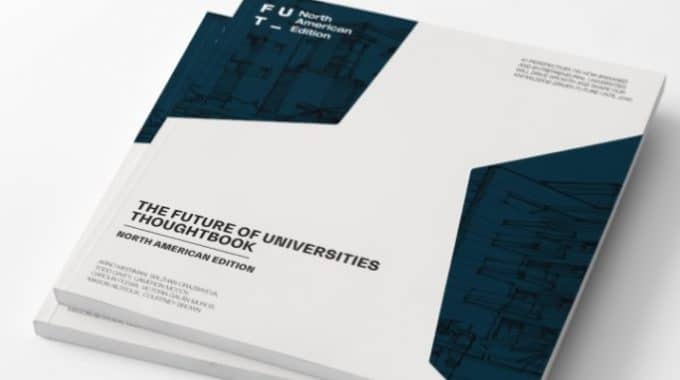 The eighth set of articles from The Future of Universities Thoughtbook |North American Edition introduces the Head of Business Development at Hyland, Natalie Smolenski,  the President of National Academy of Sciences, Marcia McNutt, and President and Vice-Chancellor of University of  British Columbia, Santa J. Ono.

In the article “The Purpose of the University”, Natalie Smolenski suggests that the marketplace is confused about the value that the university offers. In response, universities often mistakenly try to be everything to everyone. Natalie foresees two emerging trends with universities choosing between being either a job factory or an institution with a purpose of a character formation.

In her vision of the future, “The University in 2040”, Marcia McNutt emphasizes that Higher Education needs to shape and drive the unpredictable 21st century as it continues to unfold. Universities should seize the opportunity to collaborate purposefully with industry and governments to align education and research programs to the needs and challenges of society.

In his article, “The University in the Year 2040: A Vital Part of the Community”, Santa J. Ono, predicts a continued role for on-campus experiences along-side online education activities with a more diverse student population in terms of age. The greatest change Santa foresees is that there will be more of the collaborative problem-based research and interdisciplinary cooperation in education and research.

The Thoughtbook artfully collates a group of 40 diverse voices and narratives while sketching out the future roles of universities, their relevance, and their evolving position within the broader ecosystem of knowledge and innovation production. They are divided into 5 thematic sections – Disrupting Education, Collision of Technology and Humanity, Socially Engaged University, University-Business Cooperation and Institutional Change. With different foci, each of them contributes to creating insightful for further dialogue on how universities would shape the future by 2040. In doing so, a wide palette of university future scenarios comes to light.

For more information and to order or download your copy of The Future of Universities Thoughtbook | North American Edition visit our website  www.futureuniversities.com.